How to read formulas in the PANTONE® formula guide! 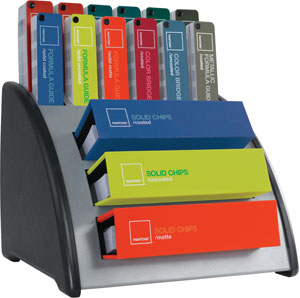 In the PANTONE® formula guide, what is the difference between the "parts" measurements on the left side of the swatch, and the percentage formula on the right side?

The PANTONE® formula guide expresses the ink formula in both a parts and percentage mixture.

The parts formula is designed for users of older, manual scales that use parts. While some older triple-beam scales actually contain a defined unit of measure called a "part," basically, a "part" can be any unit of measure as long as it is uniform, i.e., one ounce, one beaker, one tablespoon, etc. Essentially the formula will work for any uniform amount.

The percentage formula is a percentage-of-the-whole formula, which is why the numbers add up to 100. To use this formula, you must first determine the volume of ink that you are going to mix. As an example, assume that you wanted to mix one pound of ink to match PANTONE® 185. Since 1 lb = 16 ounces, 16 is your whole. The formula would break down as follows:


The PANTONE® formula scales are preprogrammed with the percentage formulas. As ink is added to your beaker, the percentage reduces until it hits zero, at which time the optimum amount of that ingredient is present.  Following are links to the Equipment homepage at pantone.com; use the links at the upper left of the page for the various scale models.
Posted by Pertech Corporation at 7:04 PM